For our second trek to Everest Base Camp and third trek to Gokyo and over Cho La Pass we stayed in Khumjung (3790 metres) in addition to the two nights spent in Namche Bazaar (3440 metres or 11,286 feet at its low point). We believe a third night at that similar altitude has helped with our altitude acclimatisation on two of our three treks.

Although our three treks to the Khumbu region have been “independently”. The first time totally without a porter/ guide, which we wouldn’t do again. It is better to have some form of local support and it enriches your trip having someone local with you. The second and third treks we took a porter/ guide, making it just the three of us, there are a few trekking companies that do a similar itinerary around this altitude, that is an extra day in Khumjung – but you have to search for them.

Apart from the benefit of assisting with the acclimatisation it has great views and you can see the “Yeti Skull” at the lovely monastery.

Going up, UP, UP to Khumjung

Khumjung is the biggest town in the Khumbu. We were in no rush to leave the hotel this morning on Day Four of our trek. The slow steep walk took us 3 hours and 20 minutes but it took another hour to trek to the top to Mountain View Lodge. Silently I was cursing myself for agreeing with our lovely porter guide to stay the night at this lodge. He knew the people and the lodge. Because the lodge was at the top of the town it was another steep climb. But the views were worth it especially the next morning. The town is totally surrounded by mountain ranges.

The Monastery is worth a visit I love some of the photos taken in there in 2015.

And would I climb the extra hour to the top of the village again? Yes I would.

Has there been a time when you have gone that bit further, put in extra effort for something special, a higher view, another viewpoint – despite being exhausted?

Day Two A Shorter Walk from Monjo to Namche Bazaar

People planning to trek to Everest Base Camp read about the steep 600 metre climb to Namche Bazaar after crossing the high bridge over the Dudh Kosi river and gorge.

why you need to climb to Namche bazaar slowly

END_OF_DOCUMENT_TOKEN_TO_BE_REPLACED

To My Valentine Trainer

We met in Egypt. And had four days together. He made me laugh, something clicked and there was that spark. We talked about me visiting him in Milan but as a teacher it had to be the school holidays and it seemed way too long off. We exchanged details and said goodbye.

END_OF_DOCUMENT_TOKEN_TO_BE_REPLACED

A Basic Overview To Everest Base Camp Trekking

Maybe you’ve just returned from hiking to spectacular Machu Picchu and are keen to try the Everest Base Camp trek. Or you’ve been thinking about it for years but you know next to nothing about it, this post is for you.

Decide when and where you will trek twelve months in advance to give yourself plenty of time to prepare, research and train whether you are trekking with or without a tour operator. Being prepared for what the trek is like this is critical. Mental preparation is everything. Everything.

Basic Points About the EBC Region when you know absolutely nothing

END_OF_DOCUMENT_TOKEN_TO_BE_REPLACED

We’re off to Trek in Nepal. Again.

Yes, I am in love. In love with the Nepalese landscapes and with the simplicity of the trekking in Nepal. A colleague asked me what’s the attraction with Nepal.

Why Go to Trek In Nepal?

END_OF_DOCUMENT_TOKEN_TO_BE_REPLACED

How Difficult is the EBC Trek ?The trail in 20 photos

It’s about what you are walking on…

The last few kilometres to Base Camp on slippery scree. But let’s start at the beginning

END_OF_DOCUMENT_TOKEN_TO_BE_REPLACED

I loved , loved, loved this day and Dingboche. I could go back to this part of the world every year if I could.

Ok there is a fuzzy bit in the video but – who cares….

Who is coming next time we trek here ?

Yes and thank you to our Porter .. Basanta he was lovely… for always watching out for me.

A Photo is Worth a Thousand Superlatives 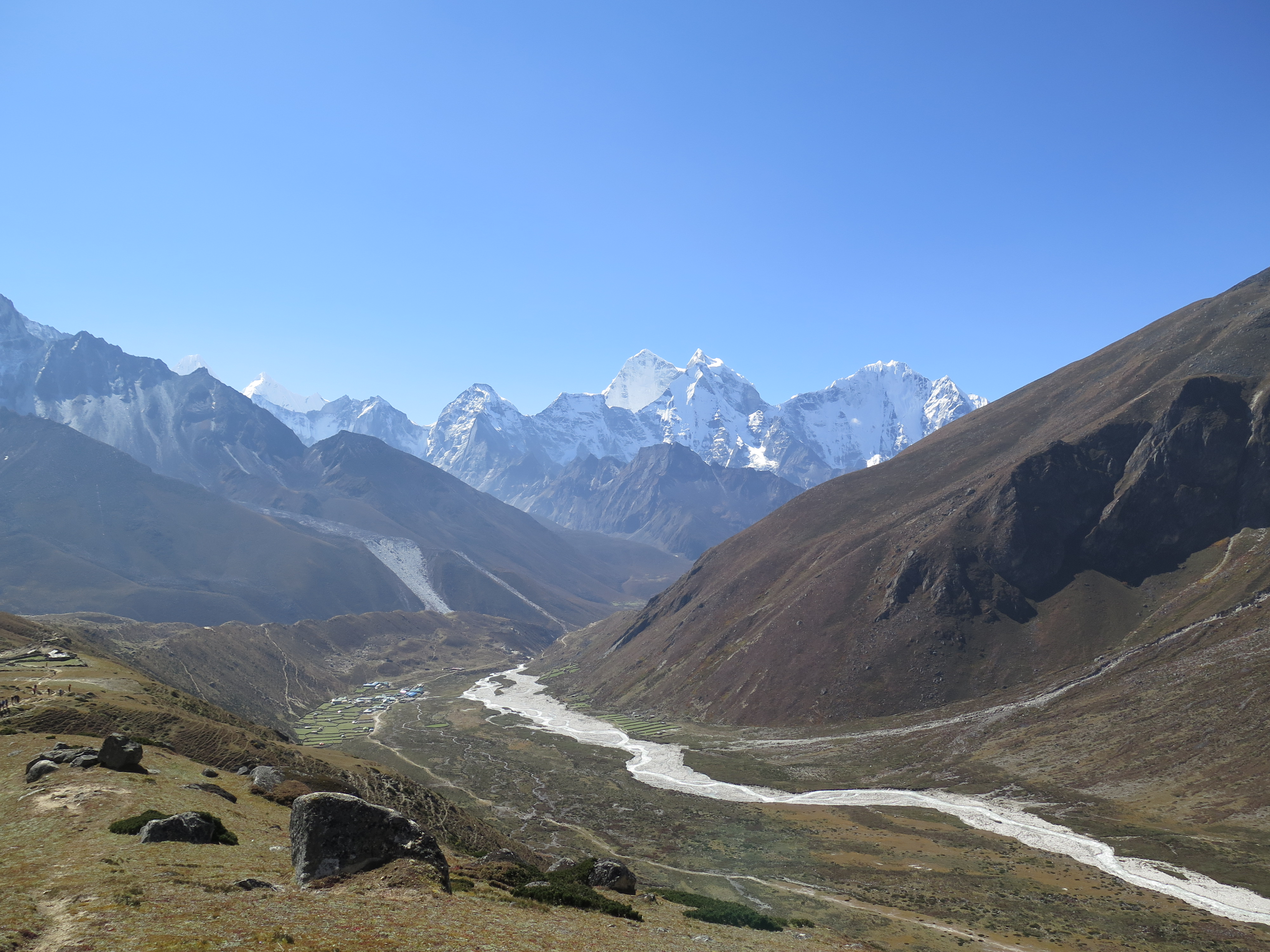 From the moment you walk out of Lukla to trek to Everest Base Camp the views are beautiful. The higher you go the more amazing the views, higher again the views become breathtaking panoramas. END_OF_DOCUMENT_TOKEN_TO_BE_REPLACED

Three Months Until Your EBC Trek? Get Training

Do I need to include steps in my training ? You bet. By the end of your training you should be able to do 1 hour of steps with a ten minute break in the middle.

There’s the man with the vision and the all the plans. Trek to Everest Base Camp, Nepal. He had been to trek the Annapurna circuit in the 80s and he knew there is a lot of uneven ground so he insisted on finding uneven hills to train on and lots of stairs too.

And stairs were in abundance …..

END_OF_DOCUMENT_TOKEN_TO_BE_REPLACED

The colour on the inside of the monastery was a welcome warmth from the cloud that had descended on the town for most of the day. The monastery is the red building you can see on the right (below).

END_OF_DOCUMENT_TOKEN_TO_BE_REPLACED

Meeting Yaks on the Track

On the Everest Base Camp trek you might see mountain goats, magnificent eagles and other beautiful birds but the yaks were my favourite along the trail.

END_OF_DOCUMENT_TOKEN_TO_BE_REPLACED

A Post about Food on the EBC Trek Becomes More. Or Is it Less?

There is a difference between basic and simple. Especially when you are traveling.

Recently I posted about accommodation on the EBC trek being basic. A comment from a fellow blogger (thanks Miriam) made me rethink how I had labelled  the accommodation. It is the very fact the Everest Base Camp Trek is basic, makes it so good. Basic can be seen as a negative.  So simple, not basic, is a better word to use. Because it is the simplicity of the EBC trek that makes it so special.

END_OF_DOCUMENT_TOKEN_TO_BE_REPLACED

Paradise Lodge Lukla and the washing and tents drying

Three photos of a Stupa in Khumjung taken from different directions and over five years. Photos taken in December 2013, the end of September 2015, two earthquakes later and in September 2018.

There is a beautiful mani wall along the walk in from Namche Bazaar.

I assume the cracks are from the second earthquake on May 12 2015. The small boy in the photo has his back pack on and had just come out from the Edmund Hillary School, the biggest school in the Khumjung.

And finally in September 2018 the repaired stupa in Khumjung but the eyes and face are not finished in this photo. The open space in front of the stupa to the right of the mani wall is the play area for the Sir Edmund Hillary School. The wall around the school has been repaired as well. That is me walking in with the red jacket and our porter guide on my left. As for most of the photos the Trainer (my husband) was taking the photo.

Two Earthquakes and Two Films – another of my posts

A Favourite Day on the Everest Base Camp Trek

Read about our Acclimatisation Walk to Dingboche Ridge-top probably one of my favourite days on our trek.

Or the walk into Dingboche or the walk out to Lobuche.

END_OF_DOCUMENT_TOKEN_TO_BE_REPLACED

For some time I have planned to write a post about this amazing woman who I met on both our Everest Base Camp treks. Both our treks started out from her  Paradise Lodge in Lukla after breakfast, after our early flight to Lukla. We stayed our last night in Lukla before our morning flights back to Kathmandu at the end of our treks.

This photo was taken after our evening meal in her lodge in October 2015. Due to the two earthquakes that year, it was a quiet night guest wise in the lodge and so she had some time to sit down and talk to me about her work in the Khumbu. The reason I knew to ask about her work in the community was  because on our 2013 trek we found a hotel directory with some information about Dawa and her husband Ang Pasang.

I have taken the information from the directory.

Needles to say she is very busy with running the lodge and all the community work she continues to do. What better day than International Women’s Day, to acknowledge Dawa Phuti Sherpa’s wonderful work in the Khumbu both past and present.

Inside dining room at Paradise Lodge talking with Dawa

Celebrates Womanhood started in 2002 as an annual event to celebrate the vision, inner beauty and power of women. The objective is to honour women in various fields of arts, education, sports, community service, health and industry and to applaud their dedication to their respective fields. Shrijana Singh Yonjan, the mind behind the event says that each award has been named after a goddess and the attribute she signifies. The awards recognise nine different fields of achievement (Nava Durga).

Did I cross this ? 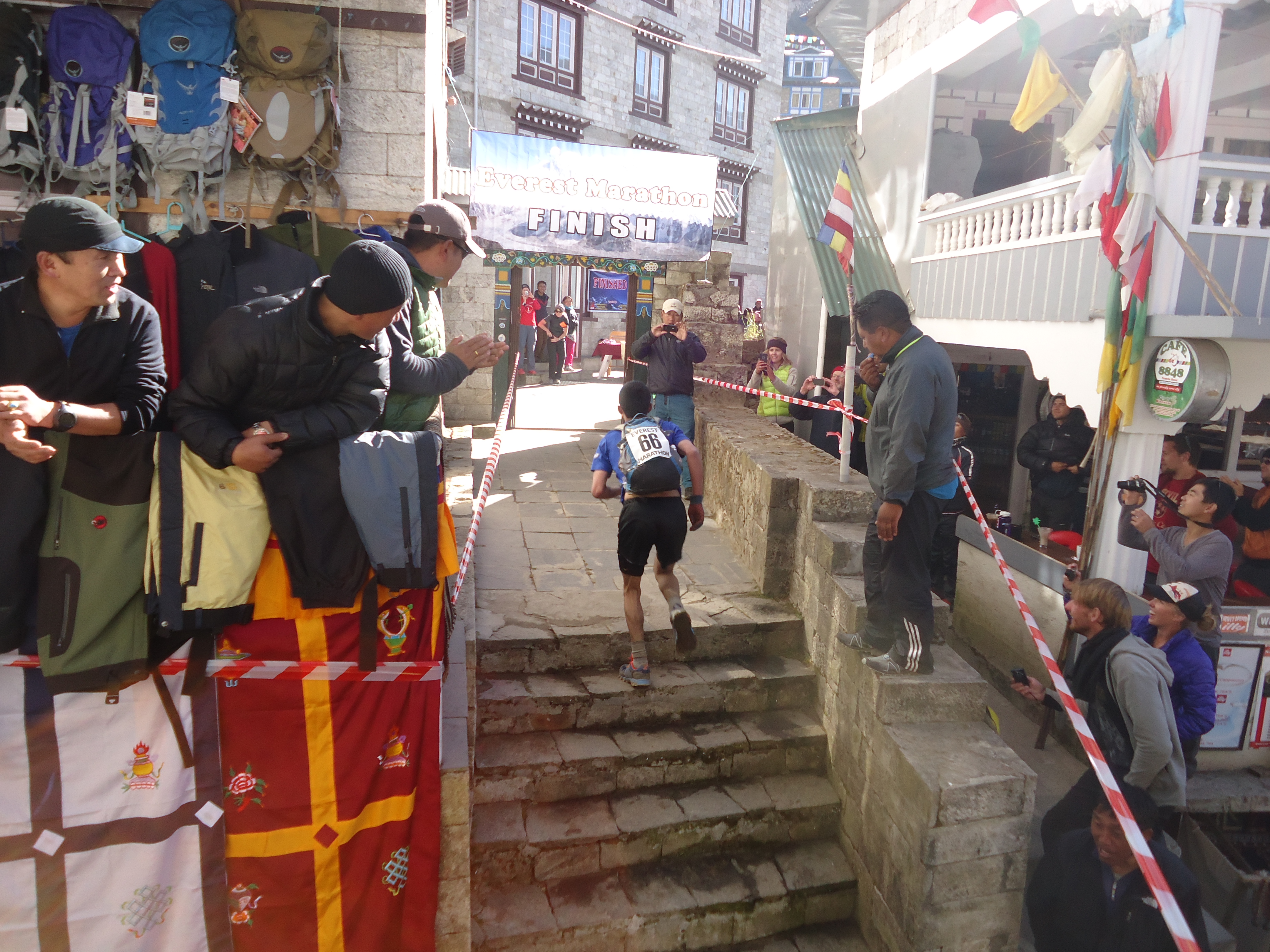 There are two in fact. The official Everest Base Camp Marathon is the Tenzing – Hillary Everest Marathon held annually on 29 May the date of their Everest summit. The biannual one held in November is run by a UK charity organisation and raises money from the event for community projects in Nepal. Both marathons finish in Namche Bazaar. END_OF_DOCUMENT_TOKEN_TO_BE_REPLACED