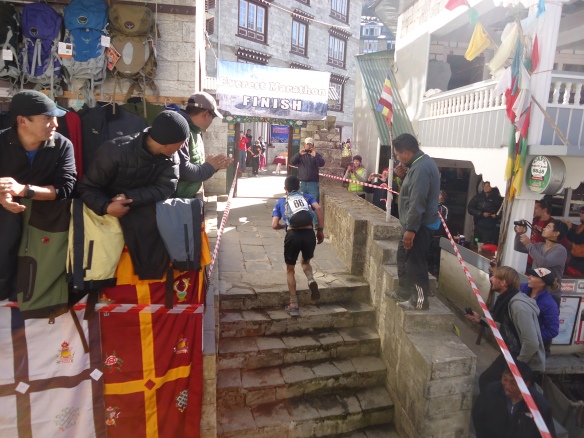 There are two in fact. The official Everest Base Camp Marathon is the Tenzing – Hillary Everest Marathon held annually on 29 May the date of their Everest summit. The biannual one held in November is run by a UK charity organisation and raises money from the event for community projects in Nepal. Both marathons finish in Namche Bazaar. END_OF_DOCUMENT_TOKEN_TO_BE_REPLACED

One Trek and One Marathon

The trainer was very excited about finally seeing the marathon runners who had started early that morning from Everest Base Camp running past, all of us on our way to Namche Bazaar. The event was originally in May but was rescheduled to the beginning of October after the earthquakes.

We left our lodge at Pangboche as doctors prepared the medical check point and lodge staff the water bottles.

View of Tengboche in the Middle Distance

The Temple Gate in Tengboche (Thyanboche)

The following photos show the track. The steep uphill climb (600m) had nearly killed me on our 2013 trek.  Coming back down isn’t easy either.  It can impact on your knees which is why I chose to use trekking poles. The steep track with lots of small loose rocks can be slippery so the only way to go is slowly.

That’s me picking my way down with the trekking poles.

The trail from a distance… crazy

The Finishing Point at Namche Bazaar

Namche Bazaar from Above

The view of Namche Bazaar from above. I had my sights set on the red roofed lodge in the middle, right …. which for me meant our favourite lodge, our own bathroom and a hot shower at last.

Cafe Danphe Bar named after the National Bird of Nepal

We had a drink at Café Danphe Bar to celebrate our successful, wonderful trek to Everest Base Camp. Huddled together in the bar we looked at all the photos Sam had taken.  For the best of an hour I sat with tears streaming down my face, hardly able to believe the photos of the magical places we had just been.