There is a training calendar, the Trainer and a plan. There is always a plan. Only sometimes it changes.

The plan was to ride from the suspension bridge to Petty’s Orchard, have a coffee and return. Before we started Adventure Man Sam informed me of his plan to detour off the track via a really steep hill along a rocky track then rejoin the main track. The very hill (below) we trained on ad nauseum for our EBC trek in 2013. I knew I would have to walk my bike up.

TODAY – approximately 10 km ride with some big hills and competitors! 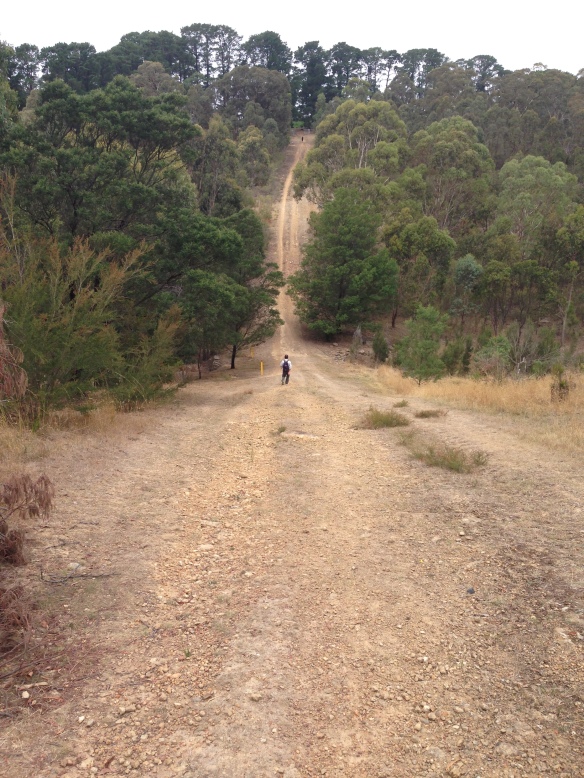 “Our hill” with the Trainer and my daughter at the very top in February.

We arrived at our hill to find the inaugural Pedal for Parkinsons 6 Hour Enduro MTB, taking place. After watching the event for five minutes, we headed off back on the main trail in the direction of the orchard. Next thing I knew the Trainer was riding up another dirt track alongside the cordoned off area of the event. That wasn’t on the plan. I had no choice but to follow.

The new route crossed over the event’s circuit at a few points. There weren’t huge numbers of riders so this wasn’t a problem. We joined up with the down hill trail from the original planned route. At this point we were on the left of the cordoned off section sharing a reasonably wide track. When we saw a rider on our side of the tape but coming towards us we realised we had in fact, joined the event, but were going in the wrong direction. That was definitely not on the plan.

Eventually we got out of the area, made it to the café at the orchard, had our coffee and headed back. With the exception of very narrowly missing a rider on another off trail track we arrived back at the car in one piece.

Who says you need to go to Everest Base Camp to have an adventure?

2 thoughts on “Boot Camp for Base Camp”