Striding Through Pheriche in the Khumbu

Here I am walking through Pheriche looking like the Michelin Man. There are lots of terrible shots of me on the trek with hat hair, up way too close etc. Showers are a rare thing on the track, so is clean hair and there are no mirrors. Complete with the hat and given today is the first Tuesday in November, the day of the nation stopping Melbourne Cup (horse race) I decided on a twist the Fashion on the Track theme. Tongue in cheek of course. However my ensemble does show off some accessories that you shouldn’t leave home for Everest Base Camp without.

The buff is the red and pink around my nose and mouth. It is a tube of stretchy fabric.

A veteran trekker told me a buff was useful because the trail can be dusty. It wasn’t dusty in September October last year but it was in November December 2013 after the track had dried out and there was more traffic on the track too. Given the dust entering your nostrils could be dried out donkey and yak dung it’s a good idea.

Most of the porters wear a buff or some sort of scarf around their nose and mouth. It helps with the dreaded Khumbu Cough.

I saw buffs in Melbourne priced at $30. We bought ours in Namche Bazaar after seeing the need because of the dust. I bought some more in Kathmandu for 60 cents.They are always at hand around your neck and not bulky like a scarf. Get one, or two they are great. 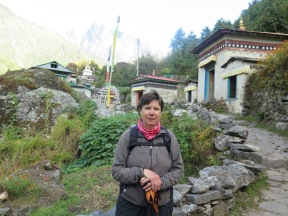 The Hat and Sunglasses

I took prescription sunglasses.You need a hat. Mine was the butt of many jokes between the Trainer and the Porter but that squash-able packable hat served me well. That’s Basanta our porter guide with it on.

Underneath the hat is a fleece headband to keep my ears warm. It might look silly but it was early in the morning I wanted warmth and sun protection.

Don’t leave home without these. Mine are quite heavy but it hasn’t bothered me. I bought them in Melbourne for our 2013 trek and trained and trained with them up and down hills around home and I realised the muscles I was using. Ooww. Some people trek with one pole but I was used to two from the start. Using poles may seem like an affectation to some but they do help especially  down hill. They save your knees by cushioning the impact. I won’t trek without them.

There are lots of poles for sale along the trail between Lukla and Namche.

My jacket is not down filled but filled with some poly fibre. It worked fine for me.

The Story of the Photo

It was Day Thirteen , we headed out from Lobuche through Periche and Shomare to Pangboche. The trail is more or less flat through Periche so I’m not using my poles. Periche is where you can hear the acclimatisation talk at the medical post run by the Himalayan Rescue Organisation .Walking through there were piles of stone from the earthquake damage. We stopped to use a toilet in one of the lodges so I bought a cup of tea and enjoyed it in the sun. 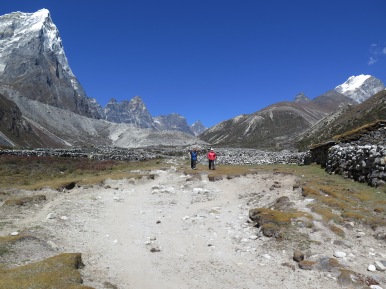 While on the subject of hats, this is me in Gorak Shep getting dressed in my sleeping bag because of the cold. I’m doing a  good impersonation of Marge Simpson don’t you think?

15 thoughts on “Fashion on the Track”