In September 2015 my husband and I flew to Nepal to trek to Everest Base Camp. At the departure hall at Melbourne Airport saying goodbyes to our adult daughters,  the eldest hugged her father and said

And with that sage advice…

Why I’m posting another version of our treks

On the first anniversary of our 2015 trek to Everest Base Camp I’m revisiting  the posts to compare some aspects of the 2013 trek, what we did differently, what factors contributed to the treks successes, how the weather, conditions and routes differed and to add extra content.

Debuche,  December 2013 and somewhere between

We met Doma, our contact in Kathmandu, at our hotel. She had organised our return air tickets to Lukla, our TIMS card (the passport for the Khumbu area) and our porter – guide. In 2013, Doma had arranged this minus the porter.

Her husband Lhakpa was with her. After hearing about him and seeing his stunning photographs on Facebook it was nice to finally meet him. We discussed our itinerary with Lhakpa and decided to trek through Phortse for the views, rather than Tengboche.

Fortunately as it turned out, Doma said she would meet us with the air tickets to Lukla at the airport the next morning.

Nearly Missing the Plane to Lukla

Most organised treks stay at Phakding the first night. How your day pans out really depends on when you fly into Lukla. The first flight is at sixish and if it is delayed so are all the other flights for the rest of day. Naturally everyone wants to be on early flights given they have to walk for three or four hours once they reach Lukla.

In 2013 we were unable to take off from Kathmandu for about three hours waiting for fog to lift. That was late November. Fortunately we were one of the first flights on that day and we were the first flight last year too. Last year we very nearly missed the flight due to the driver at the hotel sleeping in! Fortunately as Doma was at the airport to meet us she had people at every check point waiting for us to run in, rush us through and shepherd us to the next point. I have never been processed so fast in an airport, in my life.We waited a few minutes before getting on the bus to drive out to the plane on the tarmac to the plane.

Trek Planning Tip : Build some buffer days into your trek in case of problems with flights or altitude. 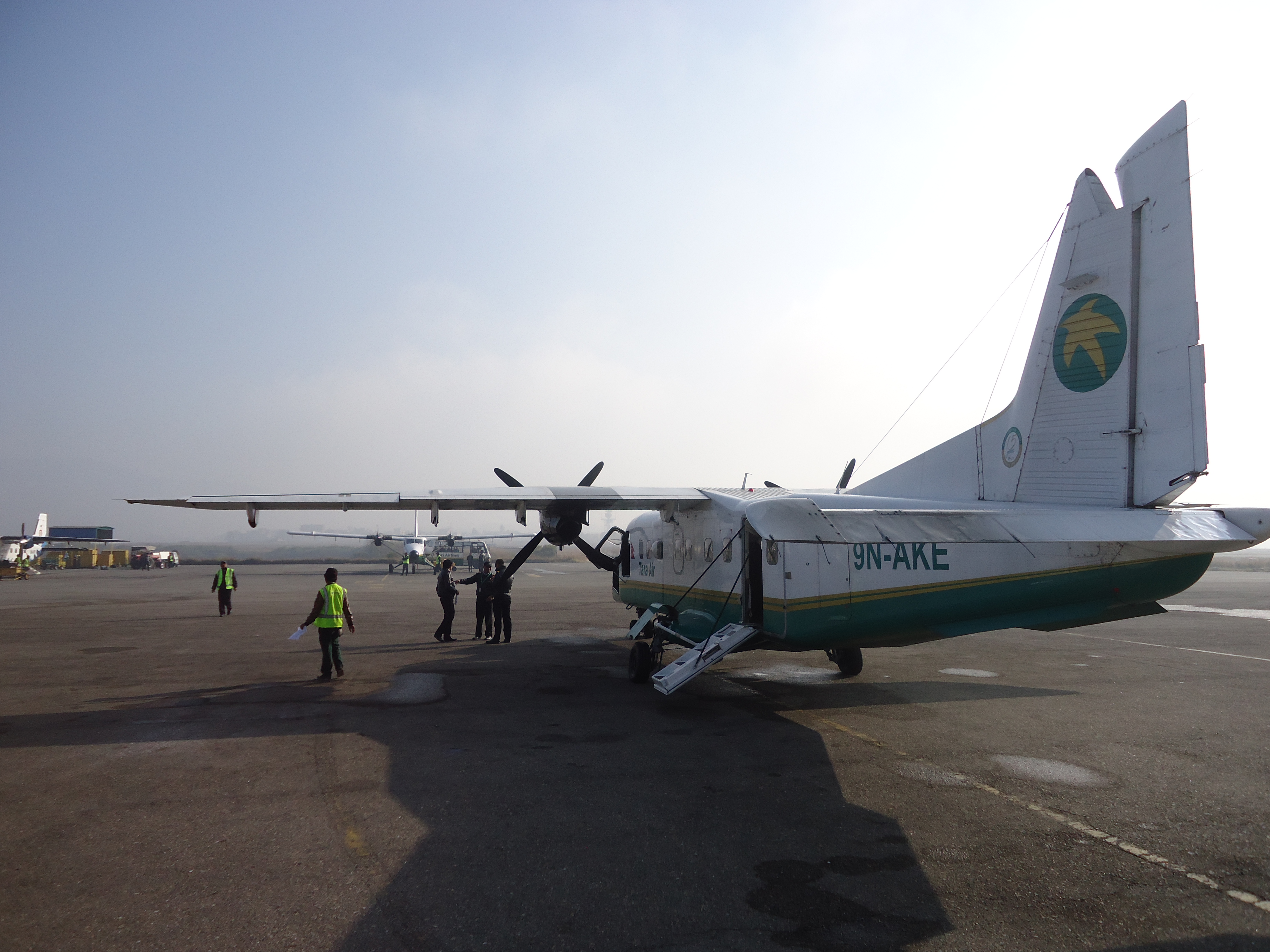 In 2013 I was very nervous flying into the infamous Tenzing-Hillary airport at Lukla. Here it is. About the size of a postage stamp.Yes you can see the entire length of the strip. No room for error but the pilots fly the route day in and day out.

Having done a return flight to Lukla before, I was feeling relaxed about taking the flight again in 2015. Until the earthquakes. Then I was anxious about another large tremor or a landslide. Imagine a major tremor happening while you are in the air and something happening to the air strip? I get anxious about some things…A lot of things actually.

There were men waiting and hoping for porter jobs at the airport. I can’t imagine these days with the internet and the huge number of trekking agencies in Kathmandu many people would organise a porter at this point.

We were met at the airport by our porter guide Basanta. He took our bags and we walked to the other side of the runway to the Paradise Lodge. I had a very teary moment looking down on the runway relieved that we were finally there and feeling we had made the right decision to come.

We organised ourselves at the Paradise Lodge, had a cup of tea and organise ourselves before heading off. For our first trek, Doma in Kathmandu suggested we leave our air tickets with Dawa the lodge owner, for safe keeping. This worked well for us as we turned back at Shomare and we needed to fly out earlier. Her son re arranged  our flights while we were still on the trail back down. So we left our tickets with Dawa again, told her when we would return and stay the night at the lodge before flying out.

I got very teary seeing Dawa again.When we left she zipped up my fleecy top, held my shoulders and told me me she would see me again when we got back from Base Camp. Reassurance. Yes, we would make it this time and we would be safe.

Number One Rule of The Mountains Trekking Out of Lukla

I imagine before trekking companies leave on a trek  they meet with their trekkers about what to expect on the trek. Some dos and don’ts before they leave Kathmandu. Although we were not part of a formal group I knew what to expect the Trainer had trekked in the Annapurna region in the 80s and he had researched etc. As we set off in 2013 I knew what he called number one rule of the mountain.

Rule 1 Stick to the mountain side when animals are passing. You don’t want to get pushed over the side of the mountain by a donkey or yaks plodding past.

No sooner had we stepped out to the main street of Lukla, the first yak train passed with their beautiful yak bells ringing.

It felt so surreal. I had all the gear. Had trained, knew about the challenges ahead, but I never done anything like it before. I felt like a person in the wrong body.

This is me (below) with my pumpkin coloured pack setting out in 2013. The sign was advertising the Everest Marathon in a few days. Ironically we were to see the official one set off on our second EBC trek in 2015.

The track varied incredibly on the first day from cobblestones in Lukla,  quite even meandering parts, to rocky steps and very rocky sections. In the general scheme of things it is an easy day. We now know to double the time needed in one guide book. A second guide  book now seems closer to the mark. It took four hours for us to get to Phakding.

The track is the same path through the little villages and can be quite narrow in parts. Shared by trekkers, porters, pack animals ( yaks, donkeys and horses ) and kids on their way to school and is quite busy. I have selected the photos to show the variety aspects of the track on the first day.

The track is described is an easy downhill walk to Phakding. I remember thinking on the first day – you’ve got to be kidding me. I learnt you have to go uphill sometimes to go downhill.

Things You will See Along the Trail

The first day you get a taste of everything. The animals, the porter resting spots, the prayer wheels, the stupas, the mani walls and mani stones. Oh and the bridges, can’t forget those.

Although the trail is in a remote part of the world it has rural feel in lower section before the climb to Namche. There are lots of little villages along the trail. There are many lodges before Phakding where most treks stay the first night. But not everyone goes all the way to Base Camp and also if a flight is delayed and or flew in later in the afternoon I guess trekkers can stay in one of the lodges before Phakding.

In October 2018 on our return from Gokyo we noticed how many more lodges have been built since our 2015 trek below the Royal Sherpa.

An Extremely Quiet Trek and Season

Last year when we trekked it was extremely quiet. There were three reasons for this.

Showers on the Everest Base Camp Trek

Having had a late afternoon shower experience in 2013 at the lodge above I was keen not to repeat the experience last year.The first year we had our own bathroom. Last year we did not shower despite being the only people in the hotel because of the quiet season. I was prepared to wait for a lovely hot shower in Namche.

Showers are an interesting experience on the EBC trek. They are few and far between. Controlling water temperature is very tricky and is likely to be scalding hot followed by freezing cold. And brief. While you dry off expect to be cold unless it a warm and mid afternoon.